A Trip to a Fiber Fest!

As I promised, I'm finally getting around to write about my knitting group's (or some of us) trip to a fiber fest in Torrance, CA a few weekends ago. We all decided to get an early start, as we were driving about an hour and 45 minutes to get there. Of course, the weather decided not to cooperate, as it was pouring rain on the way there, but we got to the event safe and sound. I have to say, this was my first fiber fest I'd been to, other than the Vista Fiber Fiesta in which I had a booth. It was nice to walk around and not have the stress of having to sell my own yarn, though I do plan to try to have a booth next year.

We weren't sure just how big the event would be, and when we first walked in, we weren't very impressed. My first impression was a hoarder's house, as the "booths" (and I use that term VERY lightly) just had bins and bins of fiber, weaving items, books and yarn piled up on the floor and tables. Luckily, we found out it was several other rooms, so we took our first thoughts with a grain of salt to start. Luckily we weren't disappointed with the rest of the show. As we went, there were booths/companies we were very excited to see. Some of the yarn was SO pretty, it was hard to resist...and so I couldn't! I took quick pictures of what I bought, yarn wise at the show. 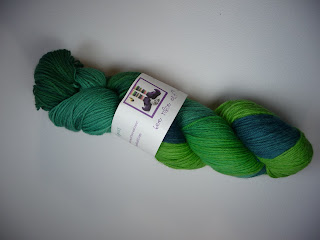 I picked up a skein of sock yarn from Bee Mice Elf (pictured above). She's mostly known for her fiber, but since I don't spin, I figured I'd try a skein of her yarn. I haven't used it yet, but it sure is pretty! Another dyer I was impressed with was Chameleon Colorworks. I was lucky enough to get a skein of her Bambino sock yarn. It has a beautiful shine to it and is so soft. I can't wait to use this as well. The new year can't come soon enough!

I also bought two project bags (sorry, no pictures of those right now), one for socks that has the traditional MGM monsters on it, and one for larger projects, which has yarn guides. I LOVE it for my Rhombi sweater, since I'm going back and forth between two cakes of yarn. The larger one have little sheep knitting on it. SOOO cute. I promise to take a picture of both of them at a later time.

After the show, we decided to grab lunch. Luckily, the weather had changed at this point, and though it was cold, the sun was shining. Since it wasn't too late, we decided to hit up one of my favorite LYS in Southern California, Alamitos Bay Yarn Company in Long Beach, CA. I don't get their often, as it's about 1 1/2 hours from home, so it was fun to visit. I was the only one in the group to have shopped at the store, so it was a treat for everyone. We got there right before they closed, but they were generous enough to stay open past their closing time. I couldn't walk out without buying something, and they had this amazing sample blanket made out of Frog Tree Merino Worsted. Since I couldn't stop fondling the blanket, I figured I needed a few skeins. Again, NO clue what I'm going to do with two lonely skeins of blue worsted yarn, but I had to have them. Any ideas of pattern, again, I'd be grateful! 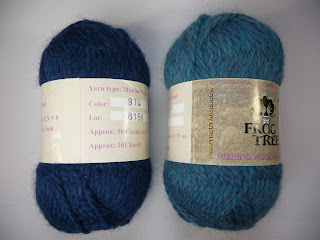 After our shopping splurge, we figured we needed to take a picture to document all of our fun. We pulled a poor guy aside to take our picture. The LYS is on a beautiful bay, so we wanted to get the water in the picture. 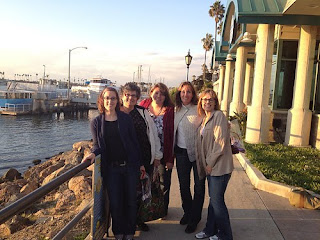 From left to right: Me, Terri, Miki, Christi and Elizabeth

That's our trip! Overall, we had an amazing day and even got home in time to beat the last part of the rain storm! I'm so glad we decided to trek up there, and I hope we do it again!
Posted by Tami Klockau at 4:11 PM