I feel like a little kid, smile beaming proudly, as I show my mom an ugly project I made at school. This weekend I made my first few knitting stitches and you would have thought I had cured cancer. I was SO excited, I showed it off to anyone who would look at it. Of course, that only included my husband, dog, two cats and Alea, but it didn't make me any less proud!

Now, if you don't laugh, I will share my first swatch. I AM calling it my first, despite starting another before it with Vanna's Choice that split like no other. It was so frustrating I almost threw my needles across the room. Instead, I decided to switch to another cheap yarn in my stash, TLC Essentials in Surf and Turf. Let me tell you, it was a smart move. This is the first time I've used TLC, which I got on sale on the big Labor Day sale Michaels and Joann's was having. It's a perfect practice yarn! As far as needles, I started on size 10 Clover bamboo needles when I was working with the Vanna's Choice, but when I switched to the TLC, I used size 8 Clover bamboo needles. I like the feel of the size 8 better I think. 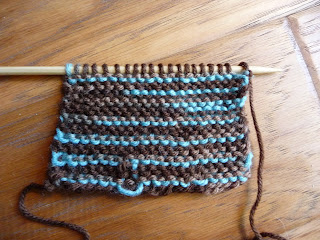 I just noticed there is some crazy pooling going on with this yarn! It doesn't look as bad in person.
As you can see, I made an error, dropping a stitch (at least I think that's what happened), but instead of worrying about it, I decided to move on and just learn from my mistake. Other than that little booboo that resulted in a nice hole in my swatch, I think it looks pretty good. The last few rows I did were starting purl, so like 99% of the swatch is the knit stitch.

I love the differences between crochet and knitting. They are so different, it's like night and day. I'm left handed, crochet left handed but decided to learn to knit as a rightie. I'm one of those weird people that uses their opposite hand a lot. In fact, when playing baseball, I bat left handed, but can only throw accurately with my right. Same with hockey. I shoot right handed, but I play goalie left handed. Odd, I know, but I decided to do the same with crochet/knitting. So far, my choice was a good one, as there is less tutorials of left handed knittng as there is for the south paw crocheters.

I started with a few different videos, watching each technique for casting on (the Knitpicks video seemed the easiest for me) before choosing my poison. I know that different patterns need certain casting on (or I think), but right now I wanted the most simple. I then moved onto the Knit stitch, working on the garter stitch for this swatch, before moving onto Purl stitch Monday night.

Between Knit and Purl, I have to say, I like knit stitch MUCH better. Purl seems/feels so unnatural for some reason, but this may be because I just started it. I hope it comes a little easier to me. I was at Borders yesterday and saw a great book, The Harmony Guides: Knit and Purl: 250 Stitches to Knit (or it seemed great, I didn't buy it) that really opened my eyes to the K & P stitch. I didn't realize that you could do a ton of different stitches just with knowing these very basic things.

I did buy this book, Chicks with Sticks: Guide to Knitting, which so far is a great way to learn and have patterns based on my very beginning level. Each "lesson" they teach you a new stitch, which then leads to a pattern using it, so it builds on what you know from the previous one.

I'm SO excited to learn more, and I love how different it is from crocheting. I can't wait to start making things, instead of swatches.

I'd love to have a few books, patterns or videos recommended, so if you have any, please be sure to comment!
Posted by Tami Klockau at 12:14 PM