Happy Friday! I'm so sad I don't have a FO for this week, as it's the 100th FO Friday. I tried my hardest to finish the cardigan and there was just no way. I've been knitting like a fiend and the past two days, I've had to drive back and forth from LA to drop of Milo at my parents. This weekend is Tiki Oasis in San Diego, a tiki convention we go to every year. Milo being at my parents will be awesome, as we don't have to worry about coming home to take care of him at certain times. I'm sure I'll be posting some pics this weekend on Instagram, so if you're interested, you can follow me at @candyskein.


Since I don't have a new project to share, I thought I would show a picture of my new tattoo. It's not finished healing yet (and I haven't been able to shave my leg at the area of the tattoo since) so I decided to share the picture of it right when it was finished.

As some of you know (if you've followed this blog for awhile), I'm a HUGE hockey fan and a gigantic Los Angeles Kings fan. In fact, I've been a Kings fan since I was 10 years old (I'll be 33 in October), and have waited for them to win the Stanley Cup since I started watching. They won this year, and I wanted to get a tattoo to honor the win. 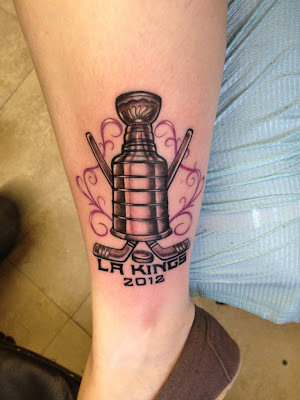 Again, this is RIGHT after the artist finished the piece, hence the redness of my leg. Pretty awesome, right? I can't wait until it's fully healed. I think it will need a little touch up, but nothing major. As you can see, there is room under the 2012, to add 2013 when they win next year. ;)

That's it for me today! I hope you all have a fabulous weekend!