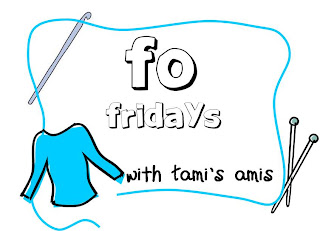 How is it Friday again? Where did this week go? Insanity. I didn't get a ton of knitting done, but as you could see from WIPW this week, I only had the assembling to finish for my little knit monster. I started Petunia the Patio Monster by Rebecca Danger on February 7th. You read that right...FEBRUARY 7TH. I cruised through the body and thought I would cruise through the legs and arms. I guess I got too cocky after learning the 3 needle bind off with ease. I tried to start the legs/arms with DPNs like the pattern suggests a billion times. With much frustration, I wanted to throw it across the room, but instead decided to try the magic loop for them. That's how I did the body and it was so easy, of course I could do it...except at that point I was so frustrated, I couldn't seem to cast on a simple 6 stitches and then do k1f&b to start the legs/arms. I was practically in tears so I put it away and forgot about it. I was then checking out the group on Ravelry for Rebecca's designs and BAM, a light bulb went off for some reason. I picked it back up and did the start of the arms/legs with no problem! I just needed to step away for awhile I guess. I'm so glad I did.

As soon as I finished my monster, I realized that he didn't look much like a Petunia, well, because he's a he. At least he looks like one, don't you agree? So, I'll stop rambling so you can officially meet Roger! 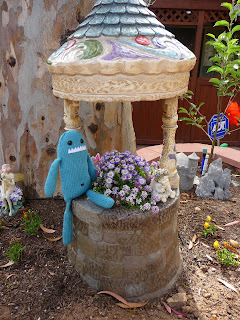 Despite the name change, Roger informed me that he is still a garden monster. Here he is making a wish at my neighbor's fake wishing well. 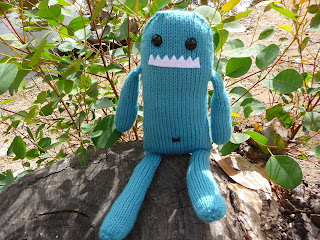 Here's Roger hanging by the pond off my back deck, enjoying the late afternoon sun. 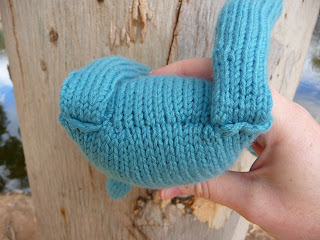 Roger definitely didn't want me to share the crotch shot, but I couldn't resist showing how clean I stitched him up! I'm super proud of it.