To Dye or Not To Dye

I've been dying to dye yarn for awhile now, and yesterday I decided to take the plunge. On Saturday, I bought some Kool-aid packs, as well as a 12 color kit of Wilton's Icing Dye. I didn't know what color(s) to pick, so my husband told me to pick a number and he assigned each color a number. I ended up picking Kelly Green and Royal Blue Wilton's Dye. I searched the web, reading a few tutorials, as well as a few threads on the Ravelry group, What a Kool Way to Dye. Below are pictures of my process, which I did in the Crock Pot. 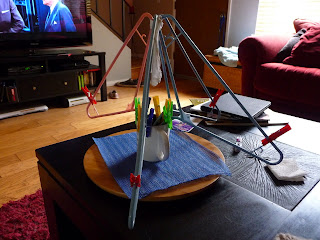 First, I made a Swifter, from these directions found online. I don't have the money to spend on a professionally made one, and this worked just as good. I bought most of the items at the 99 cent store, the only one I didn't was the lazy susan (from Walmart) and the coffee cup. I had the hangers, but those could be bought at the 99 cent store as well. 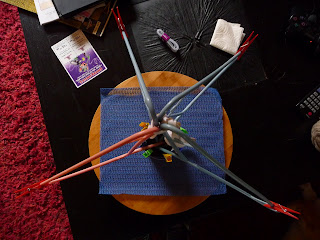 Top down of the homemade swifter This is the yarn I decided to dye from my stash. 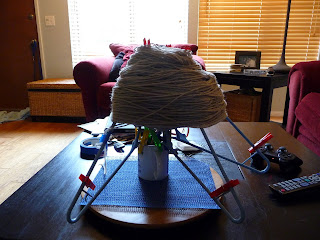 The whole skein on my homemade swifter 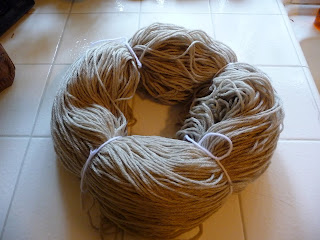 This is the whole skein- 465 yards. I realized it was too much, so decided to separate it into smaller hanks. 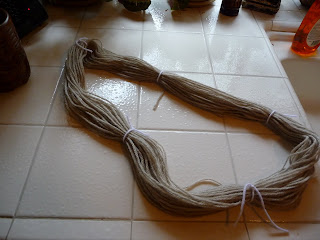 This is the amount I decided to use at first. I have no clue how much it is, but not a large amount. 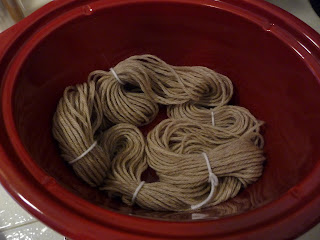 The yarn in the Crock Pot, waiting for me to fill with water and vinegar. Put just enough to cover the yarn. 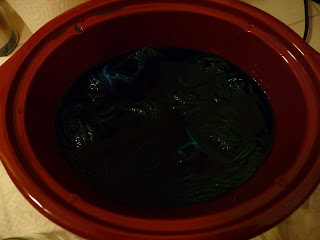 I soaked the yarn in a mix of water and vinegar. Then, I mixed the dyes in a cup of boiling water, and poured it in. The green on the right, blue on the left though it kind of merged into one. 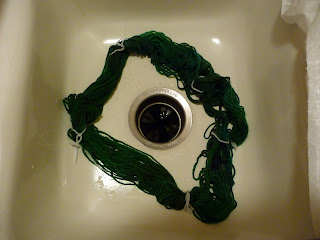 After the dyeing process is over, I pulled the yarn out of the Crock Pot (with tongs) and laid it into the clean sink 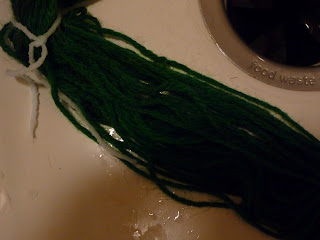 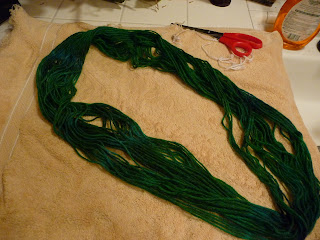 This is the yarn after cooling and squishing the water out with a towel. 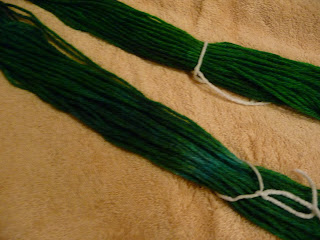 A close-up of the yarn, wet but not dripping 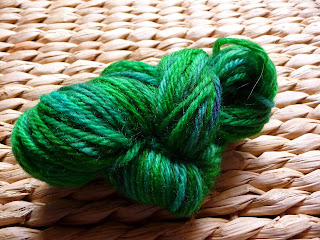 In this picture, you can see the variation of the skein. It has areas of green, blue and lighter areas the dye didn't hit. 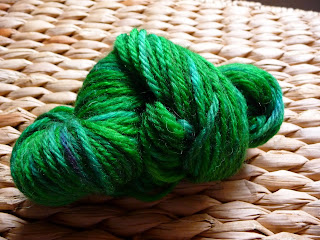 This is my attempt at twisting the yarn into a hank.

Overall, I'm very happy with how it turned out. There are darker and lighter areas I'm not crazy about, but for my first time, you can't go wrong. I'm currently dyeing another section of the skein, which I'll share in a post later this week.
Posted by Tami Klockau at 11:37 AM