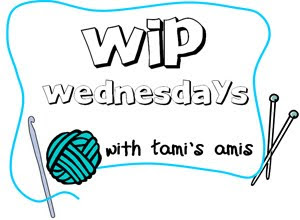 Happy Wednesday everyone!!! It's hump day, so don't get too excited, as we still have a few days until the weekend. Speaking of weekends, how did Comic Con go you ask? Splendid (see below, especially if you're a Doctor Who fan)! 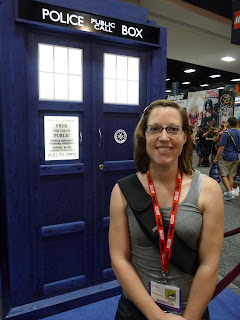 That's right, me with the Tardis. WITH THE TARDIS!!! It even lit up and made the Tardis sound. If you don't think that's cool, check out my next picture. 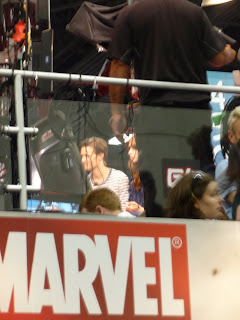 Who is that, you ask? Well, I'll give you a few guess, but it shouldn't take long. That's right...MATT SMITH AND KAREN GILLAN (though she got totally cut off by the stupid guy standing in front of her, BUT you can see her profile kind of.)

Not the best photos in the world, but the ones I got closer were blurry as people were knocking into me. It was mad. If you'd like to watch the interview they were giving while I took this pic, you can watch it here. I wanted to go to the Doctor Who panel on Sunday, but people were already lining up at 12pm Saturday afternoon for the 12:30pm Sunday afternoon start time. Insanity. Matt and Karen were actually handing out Tardis burritos to those in line around midnight. So so awesome.

Okay, this IS a WIPW post, so I better get to it. 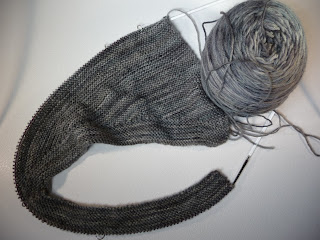 Why doesn't the skirt look any bigger you ask? Is it ACTUALLY smaller than last week, you ask? Why yes, yes it is, or maybe around the same. That's because I took it to my sister's house last week while watching my nieces. Garter stitch with short rows, how hard could it get? Well, apparently when a 2 year old gets tangled in the yarn while getting down from the couch when my head is turned, promptly pulling off several stitches from the needles...very hard. I realized at the time of panic, that I don't know how to fix dropped garter stitches. I didn't realize I did it wrong until I had already knit several rows more. I took it to a friend the next day who's in my knitting group (and works at one of my LYS) to see if she could drop down and fix it, but alas, I had screwed it up too much. Not only did I fix it wrong, I twisted stitches when trying to put them back on, as well as knitted too many rows. Once she dropped down to fix my mistakes, she couldn't successfully pick them back up without it looking like...well, crap. So, I sat as I watched her frog to the point of the problem (which was okay since she was doing it. I didn't have the strength to frog that much). I also had a little other mistake that was fixed with the frogging, so no biggie. I hope to get jamming on this again, but I've had to finish my swap monster.

That's all I'm currently/actively on. Can you believe it? August 1st I'll have to start my shawl for the Candy Skein KAL/CAL, so I'm kind of holding off starting something new. That doesn't mean I'm itching to get something new on the needles! Then again, I have a few WIPs that I've put down and haven't picked up recently. Maybe I should finish those before even thinking of starting something else (other than the KAL shawl).

Friday I'll have the monster to share, if my swap partner gets it in time. If not, I'll have to share it next week. :(

Don't forget, next Wednesday is week 52, a WHOLE YEAR OF WIPW! Look for something special to turn up.

Please remember to use the new link to your post from this week, overriding the one that Mr. Linky saves from the previous. I've had quite a few links still linking to their old posts, or links that go straight to their blog's URL instead of the actual posts URL. Thanks!