Year of Projects: A Dilemma

So I have a major dilemma. If you've read my previous posts, you know that I'm working on a skirt for A Year of Projects. I've been working on it now for about 3+ weeks and have already had to frog and re-do part of it.

I've had an odd feeling about the skirt pattern as I've been going along and my pleat has been getting bigger and bigger. Now, the pattern is horribly written, in one giant run on paragraph. So, that being said...Umm yeah, I realized I’m making it all wrong. I should have checked on it again when I was questioning my pleat. I’m working the pattern backward (which isn’t hard to do with all garter stitch) so that my pleat is where the top should be. Does that make sense? So anyway, I considered frogging the whole thing, but that kills me, as I love how it is so far. There are a few options other than completely frogging and I wanted your feedback.

A) Frog all (not really an option in my mind right now)
B) Keep going and have really big pleats, which might actually turn out cute, but I won’t know until a LOT of work has been done
C) Ripe out about 20+ rows to make the pleat a little smaller. I think I would keep it bigger than the pattern calls for but it would be a little smaller than it is now.

With B and C, I’ll need more yarn, but luckily one of the lovely ladies at my Monday night knitting group has one skein of the same dye lot as mine (the yarn is Knit Picks Stroll Tonal in Thunderhead), and was kind enough to offer it to me and I can buy her a new skein when they get it back in stock (it’s out of stock right now). So that isn’t a huge issue anymore.

What would you do? 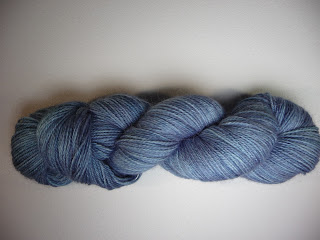 I can't wait to get started. I'll need to wind the yarn this weekend so I'm ready to go. The perfect part is, I may need a little help starting (as I did my Age of Brass and Steam shawlettte) and I have my Knitting group the night of the start date!

With all of that (not) going on this weekend, or at least until I can decide what to do with my skirt, I may start one of the Christmas presents I have on my list. Socks! We'll see how it goes. :)